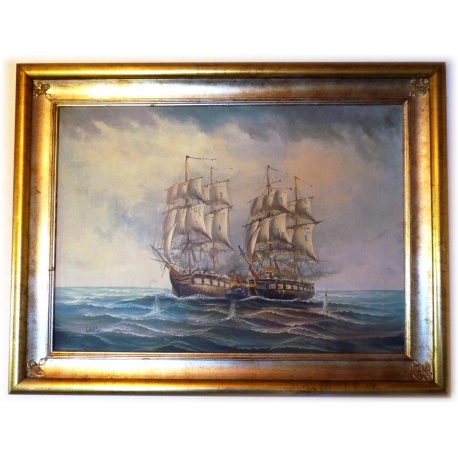 original oil painting of two frigates in Battle of Corsi incl. frame
Move your mouse over image or click to enlarge

most likely by Anton Corsi, an Italian painter who was in Rome around 1810, he painted historical paintings, mythological representations and also Portrais

the design of the two frigates, each with 18-24 cannons, fits directly onto the upper deck.

Due to this construction, the frigates had a higher freeboard than most other biplanes, so that despite a slightly smaller number of cannons in heavy seas, they had an advantage over smaller biplanes, if they could not use their heavy guns of the lower decks, which were close above the water, and had to keep the lower gates closed in order not to run full.

Be the first to write your review!